I've always loved historical fiction: Michener, Frazier, Auel, Gabaldon. So when my search into genealogy started my mind wandering about what might have influenced my ancestors, I naturally started weaving "what ifs" into their lives. It seemed more honest to start writing fiction. So, here I am.

I’ve been getting ready for Thanksgiving. Cleaning neglected rooms. Brainstorming a long weekend’s worth of menus. Slowly laying in supplies.

All this focus on Thanksgiving, and the impending descent of Christmas shopping, has made me wish for a simpler day, without all the sales hype and food flurry. You know… A Thanksgiving Day like Rose might have had.

Surprise! Things in 1929 were not so different from today after all. At least not according to a small town Iowa¹ newspaper for Thanksgiving Day (November 28, 1929). Even then, Thanksgiving was all about the 4Fs: Family, Football, Food, and black Friday.

As I perused the paper, these headlines jumped out: 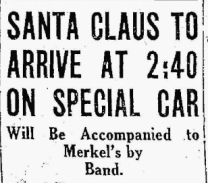 Of course, Rose, being an awful cook, no doubt convinces Harold to spend Thanksgiving at their friend’s house (since neither Rose or Harold have family in the area), and being poor farmers, there are no tickets to the big Cornhusker game in Lincoln (which would be at least a two-hour drive from their little town, anyway). But, they would have enjoyed their Thanksgiving feast—traditional Turkey, stuffing, potatoes, and pie, all, thankfully, cooked by Helen, Rose’s friend—before hunkering down by the radio to “watch” the Big Game².

And it’s likely that Rose and Helen perused the sale ads, dreaming of the things they would buy if they had the money.

¹ Nebraska is pretty stingy with their online historical content, like old newspapers, so instead of using a small town Nebraska paper representative of my fictional Inglewood, I found a small Iowa paper of the time.

² In case you’re wondering, Nebraska beat Iowa State on Thanksgiving Day in 1929 with a score 31-12.

3 thoughts on “The 4Fs of Thanksgiving”