I've always loved historical fiction: Michener, Frazier, Auel, Gabaldon. So when my search into genealogy started my mind wandering about what might have influenced my ancestors, I naturally started weaving "what ifs" into their lives. It seemed more honest to start writing fiction. So, here I am.

My house has been decorated for Christmas since the day after Thanksgiving. I’m not sure who decided this was the time to be Christmas-ed, but it is always the day my daughter insists upon. One year, though, we were in the middle of a kitchen remodel. For the longest time, it looked like we would never decorate. But then, Christmas Eve Day, my cabinets were installed while my mother and daughter and I put up the tree and ornaments.

It was the best Christmas.

Rose isn’t in the middle of a renovation and yet she and Harold won’t go cut their tree until next week, the week of Christmas. At the turn of the 20th century, folks didn’t deck their halls until the last minute. Perhaps they chose to focus more on the birth of Christ than on trees and holly. It may have been safety related, reducing the number of days the tree would be lit with dangerous electric lights, or worse, candles². Or maybe they were just too busy with chores.

But that doesn’t mean she’s not getting ready for Christmas. In fact, she’s been making ornaments to hang on her tree, especially since the expense of store-bought decorations³ is not in her budget. So, each evening after supper is eaten and the dishes put away, she sits down at the kitchen table, piecing together yuletide finery from common items she has at home: some stale popcorn and cranberries make a beautiful garland; pinecones looped with ribbon are nature’s very own ornament; and pages from old magazines are cut and glued into fancy paper ornaments, some every bit as pretty as some she’s seen in the window at Hanlon’s Dry Goods Emporium.

Here are the directions for a few modern versions I’ve found that are similar to the decorations Rose would be making at night while sitting by her stove to stay warm.

I hope you enjoy them, too. 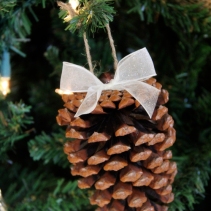 ¹Did you know that Deck the Halls got its start as a Welsh New Year’s Eve carol? With some rather risque lyrics (by 18th century standards, anyway). You can read about it here.

²In 1929, fewer than 4% of rural homes had electricity. So, while electric Christmas lights were popular in cities (they first became fashionable in the early 1920s), Rose and Harold will still have candles lighting their tree.

³Sears, Roebuck, & Co sold glass ornaments, 12 for $1. But a dollar would have bought a week’s worth of groceries at the Piggly Wiggly. Or two new milk buckets. Or new tack for the horses.

2 thoughts on “Deck the Halls”